Let's take a quick look back at the blog

Most popular post: The Indie Jones. I guess people like my take on indie RPGs. Not many seem to disagree with me, as that post still has no comments. Which leads me to my next milestone,

Publish something, for Pete's sake!: This is in progress. Just a few more hurdles await me. Mostly regarding getting art commissioned and paid for. Also, I'm confident enough that I should be able to publish two things this year. I'll be honest and say that I don't know what they are, but one of them will be Adventures in Oz.

I have entered an RPG design contest put on by Simian Circle Games. It will be something of an Iron Chef contest, in that I must design something during the contest that utilizes certain special ingredients. If you're interested in seeing how this game develops, I'll be posting updates here.

Get the word out!: I will be attending DunDraCon this year, and have volunteered to run a new Oz adventure "The Jaded City of Oz." This was written by my friend Kris and will be showing up in the AiO rulebook as a sample adventure. I would love to be able to attend Winkie '10, but at the moment, I don't think I can afford two conventions that close to one another. I do want to try for '11, though.

Podcast!: After Jared's interview and the Christmas podcast, I discovered that podcasting is something else that sounds intimidating, but really isn't that hard to do. My only challenge is coming up with fun things to say. Wish me luck!
Posted by F. Douglas Wall at 11:58 AM No comments:

Merry Christmas from the Laughing Valley!

As Christmas rolls around here in the land of Oz, the focus shifts to L. Frank Baum's interpretation of the Santa Claus story, The Life and Adventures of Santa Claus.

While I'm not a fan of the story (I blogged about that fact last year), I'm not about to step on anyone's Christmas fun.

This year, I present to you Santa Claus as a playable character for Adventures in Oz!

Note: This version of Santa was created using the standard character creation rules and is suitable for a player. If any Narrators want to use Santa in their stories as a supporting cast member, or allow Santa to appear on another character's Friends List, they are not bound by these numbers in the slightest.
Posted by F. Douglas Wall at 10:00 AM No comments:

One of my big themes is "There's more to Oz than the Yellow Brick Road." But what do I mean by that?

On the surface, it's simple: While everyone has seen the MGM movie (and its various sequels and re-imaginings) a lot more has been written about Oz than most people are aware of. And it's really fun stuff and I think people are missing out if they haven't read it.

Below that, it gets more interesting: Oz is a land of imagination. It's a place where (to quote Judy Garland) "the dreams that you dare to dream really do come true." I think that because of the success of the classic film, people tend to treat Oz as a "one-story world", meaning that, no matter how well or thoroughly crafted, it was all made to support that one particular story.

Terry Pratchett describes the Discworld as "a place where stories happen." Oz is very much the same. There are all kinds of stories waiting to happen in Oz, only a few of which have already been told. There is always something new to discover and explore.

This is one of the reasons that I think Oz is perfect for adaptation into an RPG. It's possible to tell stories that emerge from the existing lore (like the Tin Woodman tracking down his lost love in The Tin Woodman of Oz) but also to do something that has no real connection to Wizard (like Tik-Tok of Oz). New original characters are a regular occurrence (Patchwork Girl, anyone?).

There really are no limits to an Oz story, and I hope that Adventures in Oz (when it comes out) helps support that.
Posted by F. Douglas Wall at 12:46 PM No comments:

Art preview fit for a princess 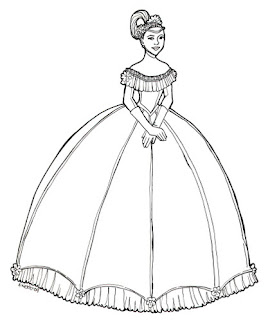 Princess Parasol is an original character I created to flesh out some examples in the Narrator's chapter of the game. While a number of the examples in the rules sections are from the Oz stories (like using the race between Jim the Cab-Horse and the Saw-Horse as an example of contested actions) to create a feeling of "These are things that happen in Oz, and you can do them in the game", I wanted the Narrator's section examples to illustrate the sort of things that would be actually be encountered at the gaming table. So instead of using Dorothy or the Scarecrow as examples, I said, "One of your players has created an original character named Princess Parasol. Here are some ideas as to how to create stories around that character."

One thing I didn't do, and might be fun, was approach the character from a player's perspective. The only thing I mentioned about the character was that she was from Umbre-La, a kingdom that was ruled by her father, King Bumbershoot. I did throw out the story idea of her rescuing her father from the Cloud Tyrant, but nothing else about her backstory or any other things that she's done.

And so I turn to you, faithful readers. What would Princess Parasol be like if she was your character? What would her backstory be? What are her adventures like? For the daring, how would you stat her for Adventures in Oz?
Posted by F. Douglas Wall at 9:00 AM No comments:

Mike Conway of Darkstar Eclectic Media, soon-to-be-publisher of Heroes of Oz, has mentioned that he once toyed with calling his game Adventures in Oz but decided against it to avoid confusion with Eric Shanower's comic book of that name. So why am I sticking with that name?

For one thing, it's not trademarked. A quick trademark search only found one close match: Adventures in Oz with Cheryl, a kids fitness video series put together by former American Gladiator Cheryl Silch. Also, Adventures in Oz appears to be the name of a children's board game.

When coming up with a name for my game, I wrestled long and hard with it. Coming up with something that set the right tone for the game was definitely a challenge. "The Wizard of Oz: The RPG"? Doesn't convey the scope of the setting. "The Land of Oz"? Conveys geographical scope, but could also be simply a reference work. Also the title of the second book in the series. "Adventures in Oz"? Conveys the idea that Oz is a place where adventures happen.

My logo designer, Brad McDevitt, threw in a really neat touch when he turned in the logo. He added a little subtitle: Fantasy Roleplaying Beyond The Yellow Brick Road. It actually says a lot of what I want to get across: 1) That it is a fantasy roleplaying game, 2) that it is an Oz game, and 3) That there is more to Oz than the Yellow Brick Road, which is one of the main ideas of my marketing campaign (you didn't know that I had a marketing campaign, did you? BWAHAHAHAHHAHAHA!)

For the record, I don't think I would have gone for "Heroes of Oz" as the name of the game. To me, it says that the game is about heroic action. But looking at the stories, the most common protagonist is a little girl, not Bruce Willis.
Posted by F. Douglas Wall at 11:14 AM No comments: