In our last episode...

When I compared Oz to Star Trek a couple months ago, there was one very important thing I left out. I didn't realize what it was until I read this Grognardia blog (Thanks for the link, Groknard).

One of the things that captured the imaginations of millions for both Oz and Star Trek was the lack of continuity. You didn't have to follow the series to enjoy it. You could watch any episode or read any story in any order and be able to enjoy them.

If there was something you needed to know from a previous installment, you were told very quickly or it was simply glossed over. The Patchwork Girl's origin story was not rehashed in every story she appeared in. She would simply appear, perhaps with a small explanatory note, and the story would proceed.

Oz fan writers often do much the same thing. They will write "sequel" or "follow-up" stories that refer to something from the old books and assume that the reader already knows what's going on. While I am not going to say that all such "sequels" are bad, I will say that they are rather difficult to do well.

How does this apply to gaming? Well, back in the day, RPGs followed a very similar format. Not by design, but by a lack of design. Early roleplayers basically treated their characters like golf clubs, choosing one to play based on the needs of the current dungeon. "4th level? You guys need a priest? Got one right here."

Much like television, gaming has expanded to include ongoing campaigns with elaborate storylines and a cast of recurring characters. Also like television, this serves to separate those who got in from the beginning and "get it" from those who are just starting out, trying to get involved later on. This has the side effect of making roleplaying very intimidating to new players. If you haven't been playing for several years or have the latest edition of the rulebooks and know the game world inside and out, there are people who will not give you the time of day. The books themselves have become larger and more expensive, a far cry from the simple booklets of yesteryear.
Posted by F. Douglas Wall at 8:01 AM 2 comments:

The Adventure Begins With You! 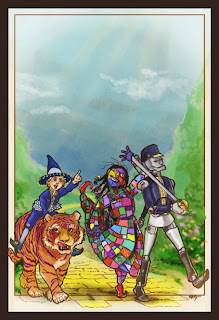 This week marks the unveiling of the cover art of the game and the new slogan: "The Adventure Begins With You!"

Wouldn't that make it an "Udventure"? Seriously though, roleplaying is an active hobby. Not in the running and jumping kind of way, but it does demand participation. A book is just a book until you apply your mind to it. So it is with a roleplaying game. Moreso, in fact, as you apply your imagination and creativity to playing your character.

While it is possible to play your character "by the numbers", it's not a lot of fun. By speaking in character (with or without funny accent) or developing personal goals, you make your play experience several times better. If everyone does it, the fun of the game increases exponentially.

A beta version of the game is will be available at http://ozrpg.50webs.com until the final game is released (Hopefully in the next couple of months). Grab some friends, make some characters and build a story out of your favorite Oz novel.

One of the slipperiest concepts in game design is that of balance. It actually comes in two flavors, so I'm going to discuss them separately.

The first component is character balance. When dealing with multiple characters or character types, each one should have something different and interesting to recommend it. But at the same time, if an option is too good, you've made all of the other options look bad by comparison.

This is the problem I ran into with my first draft magic system. Magic was too effective and too easy to do. If things got tough, the sorcerer could simply cast a spell and the problem would be solved. While you could argue that that's how the Oz stories work, it's not very fun in a game. Every player wants their "spotlight time", the chance to do something cool that only they can do, or only they can do well. To have a wizard in the party would mean that everyone else would pale in comparison. Hopefully, the redesign closed this gap.

While balance should be on the mind of every designer, it should also be part of the Game Master's responsibility. Make sure that each character that a player proposes is unique and interesting and doesn't step on another character's niche or schtick. Make sure that challenging one character doesn't mean invalidating other characters.

The next part of game balance is scenario balance. This means balancing the challenges that a character will face against their abilities. A well balanced scenario is one that makes the players work for their success, but avoids making it impossible. If a particular challenge is too hard, players will give up in frustration. If a challenge is too easy, players feel like their success was handed to them. I'm sure we've all played enough video games to appreciate that feeling of beating a boss battle once we'd figured out how to fight him. Same basic principle.
Posted by F. Douglas Wall at 8:35 AM No comments:

There's enough racism going on in the real world; do we really need racism in our fantasy? But there it is. Whether people are pointing out the differences between elves and orcs or exactly what horrible practices make the Evil Empire so evil, it's all about who's better than who because of ethnic affiliations.

Oz is surprisingly un-racist. While most of the heroes are Caucasian, no one is looked down upon due to their physical nature. The Cowardly Lion and Scarecrow were both valued friends of Dorothy during her original adventure and long afterward. The bad guys are never representative of their fellows. Ugu the Shoemaker was not a typical Herku. The Su-Dic of the Flatheads is more tolerated than loved by his people.

The most racist parts of Oz lore are incredibly tame. In "The Patchwork Girl of Oz", Ojo is subjected to a "ragtime" song in which the singer wails for his "coal-black Lulu". Later in the story, Dorothy, Ojo and company meet the Hottentots, who are playful little people who are intended to resemble African tribesmen. In the Books of Wonder edition of this book, "coal black Lulu" is simply "cross-eyed" and the Hottentots receive much less description and no illustration. Surprisingly tame stuff. I found "The Woggle-Bug Book" more offensive.

Racism does tend to turn up in the fantasy film industry quite often. Not in obvious ways, of course. Remember "Kung Fu Panda"? The backdrop was ancient China, the older characters (Po's father and the ancient kung fu master) had very Asian-sounding voices, but the hero of the film was Jack Black. Not just voiced by Jack Black, but the character was very much Jack Black, to the point of using the word (if word it be) "bodacity."

Apparently, someone in Hollywood thinks that we can't empathize with a hero unless he's "American." Notice that Jackie Chan is almost never the lone star of his American-made films. He is typically paired with an American actor, like Owen Wilson or Chris Tucker.

Some of you might be aware, the popular Nickelodeon animated series "Avatar: The Last Airbender" is being made into a live action film. Well, it seems that they're making a similar move, casting Caucasian actors in "heroic" roles while giving the villain role to an ethnic actor. While the characters are of different ethnicity on the show, it's nowhere near as glaring, as the two ethnicities are much more closely related.

Check out racebending.com for more info and the latest details on this controversy.
Posted by F. Douglas Wall at 8:41 AM No comments:

I'm actually trying not to blog about Michael Jackson this week. Everyone else seems to be saying what there is to be said about it. Almost makes me wish Farrah Fawcett had an Oz connection. For those who are easily distracted, Farrah Fawcett died the same day.

In case you were unaware, Micheal Jackson played the Scarecrow in the movie version of "The Wiz". This leaves only Lena Horne and Diana Ross as the surviving stars of this film. Lena Horne is somewhat surprising, as she is currently in her 90's.

With Independence Day approaching here in the US, Many Americans are thinking all things American.

Oz has been dubbed "America's Fairlyland" and it's true. Of all the fairylands out there, Oz was the only one created in America. Most of Disney's animated films are based on distinctly European fairy tales. Snow White and Sleeping Beauty are both creations of the Brothers Grimm, who were German. The Little Mermaid was the creation of a Danish man, Hans Christian Anderson. Middle Earth, Narnia, and Hogwarts were all created over in the UK.

While there are certainly other notable American fantasists, very few have managed the appeal and longevity of L. Frank Baum and his Oz stories.
Posted by F. Douglas Wall at 12:22 PM 1 comment: