We left for the convention shortly after my last blog posting, which is why it was so short. My friend Mike did all the driving, as he has for the last few years. One of these days, either my wife or myself will get a driver's license (and maybe our own car), but that hasn't happened yet.

Mike has family in the Bay Area, so he arranged for us to stay at his mother's house Thursday night. You see, I had only reserved the hotel for the nights of the convention. Even with my tax return, this was something of a shoestring affair. Which just means that more people need to buy my game.

Friday morning, we made the final leg of the trip, from Mike's mom's house to the hotel. It was still rather early and registration was not fully set up. But since both my wife and I had signed up to run games, our badges had been pre-printed and filed.

DunDraCon Fridays are actually pretty boring. The Dealer's Room isn't open, so there's no chance to check out the new hotness of gaming. There were a couple of seminars being held that day that we wanted to check out, though.

First was a seminar about "Surviving the Zombie Apocalypse". Although it's a remarkably unlikely occurrence, it does capture the imagination. There was a good bit of discussion on disaster preparedness in general, including mistakes that people make when they're getting ready for a disaster. They talked about preparing a "go-bag" of essentials in case you need to leave the area immediately, as well as being prepared for "bugging in", hunkering down in your own home or neighborhood in case heading for the hills is a bad idea.

Although not one of the original presenters, this guy 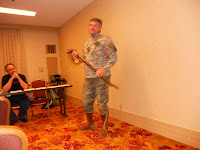 demonstrated his "lobotomizer" or "Lobo" for short; A personal defense weapon inspired by the novel World War Z. It can be wielded as an axe or a short spear. In short spear mode, the axe blade serves as a bladed handguard for close fighting. The pointed end also includes a feature to allow easy removal if it ever gets stuck in a zombie skull.

The second one was about kids and gaming. It was put on by a family of gamers (the parents had introduced the children to their hobby) who had worked on putting together a games program at the local school. I thought the seminar was good, but very dry. They focused on the educational benefits, both in terms of using games to teach concrete lessons and teaching social interaction via play (turn-taking, cooperation, etc.). This probably came from their practice going over these elements to all of the various administrators and school boards that it took to get approval for their program.

Saturday was the busiest day of the con for me. I had to be up bright and early to run The Jaded City of Oz for the grown-up group. Everyone was there promptly and was kind enough to let me record the proceedings for future use as a podcast. I've wanted to do an Actual Play recording to help give an idea to those non-gamers among my fans a better idea of the game. We did get a little adult with our language and humor, so I'm debating how much I should try to edit that down. There's keeping it family-friendly on one hand, and then there's making sure that the whole thing makes sense on the other.

I was actually surprised that I took most of the 4 hours that were allotted to me. When I ran the adventure last year, I only took about 2 hours to run through it. But once the adventure was completed this year, I had only about 30 minutes to buy some gaming stones from the dealer's room (I didn't have enough to go around in the grown-up game) and grab some lunch before I had to report to the kids room.

The kids room actually had a number of events going on. 6 tables were set up, including one table where a fellow was helping kids make leather crafts. It was pretty noisy, which had a notable effect on how I ran the game. I didn't do all my funny voices or try to do anything particularly clever. I was a bit more forgiving on die rolls and a bit freer with Oz Points, but that was at least partly because it was kids.

I did manage a few hours of free time before I was off to my next convention activity. Two more seminars that I wanted to be sure and catch, including one on self-publishing in the games industry. Even though I'm already published, I still like to check these things out. Especially since this focused more on getting into distribution, which is something that I've been meaning to do.

Sunday was either the easiest day or the hardest day of the con, depending on how you look at it. I got to sleep in that day, and got my first real chance to be a player in a game, after being the Narrator twice in a row the previous day. There were three games I was interested in that day and they were all at the same time, so I could only play in one. I decided to let the fates pick for me and wound up playing in a GURPS Horror game set during WWI. 6 hours well spent.

But then, it was crunch time. My wife was running a Pathfinder game Monday morning and we still had a lot to do. We had to pregenerate all of the characters for the players and flesh out the monster encounters that we wanted to do. We still didn't have time to get everything just the way we wanted it, but my wife managed to keep her players entertained well enough with what we had. Not too bad, considering it was her first time as a GM in quite a while.

From top to bottom: 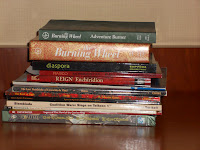 Burning Wheel: The Adventure Burner is the last of the supplements for Burning Wheel Revised. I've been able to pick up the others at previous DDCs. Burning Wheel Gold is the latest set of the core rules. Rather than 2 slim softcovers, he decided to go with one hardcover book this time. Same tempting price point. (I really need to play this game someday.)

Diaspora: Diaspora is a rather interesting beast. It's a hard sci-fi RPG in the tradition of Traveler, but using the pretty cinematic (and shiny) FATE system. It's really very well written and uses the tools it's given very well, in my opinion.
Reign Enchiridion: I'm guessing Enchiridion is some fancy term for "The short version" because this is the short version of the Reign rulebook. I actually got this one thinking of my friend Mike. He's a strategy gamer at heart (loves his RTS's) For quite some time he's been looking for a game that handles both the individual action of an RPG while still allowing a player to command an army, as in an RTS. From what I've heard, this is the game, but it'll take some reading for me to make a recommendation.

GURPS Horseclans: Only one GURPS book that I didn't have has gotten scratched off my list this year. It is apparently based off of a series of science fiction novels written by the late Robert Adams. I haven't read the novels yet, or this book, so we'll see.

Lost Notebooks of Leonardo Da Vinci and The Book of Sigils: Two supplements for the classic steampunk RPG Castle Falkenstein. Although both books focus on magic, they are two different kinds of magic. The Lost Notebooks cover "Engine Magic" which is how the setting makes all of those wonderfully impractical Victorian inventions and makes them practical. The Book of Sigils focuses on Sorcery in the setting and how an arcane Lodge is established. It also provides a few new spells for sorcerers to learn.

Bastards & Bloodlines: This one was for my wife, mostly. She loves settings full of odd sorts of people and this provides a few of those for her D&D games.
Coalition Wars: Siege on Tolkeen: This was the one Palladium book I purchased there. Since I've got something of a project in the works, I thought it might come in handy. The seller had a few other books, but my budget didn't allow me to get too deep. This is also the first book in the Coalition Wars metaplot, so it should be interesting.
Pathfinder: Picked up two of their Adventure Path modules this year. If I buy 1-2 a year, and they publish 12 a year, well . . . I'm never going to catch up, but it'll be fun to pretend.

Exalted: Graceful Wicked Masques: This supplement for the second edition of White Wolf's epic anime fantasy RPG focuses on the Fair Folk. The Fair Folk book for the first edition had lots of neat ideas, but also some rather silly numbers. I'm interested in seeing how it turned out this time around.

(I know, I'm not putting up many pictures. Just a few to illustrate the story. If you want to see more pictures of cool and random things at the con, check out our fan page on Facebook)