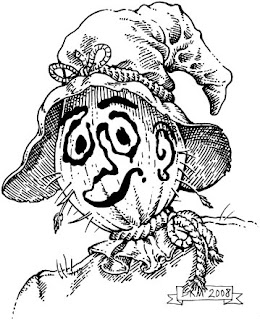 In honor of Halloween, here's a pic of a spooky (or not) Scarecrow. This one's copyright Bradley K. McDevitt and used with permission.

I had a preview of the Munchkin Country ready to upload today, but somewhere in between my laptop and my desktop computer, the file got messed up. And somewhere along the line, the original file got corrupted. I'll have to take some time to reconstruct the file, but I should be able to find the time today or tomorrow. I'll post a comment with a link as soon as I get the chance.

If you've seen the old Munchkin Country document, you might remember the Invisible Country. As I'm going back and rewriting everything, I'm realizing that there's not a whole lot to it. It's interesting as a traffic hazard, but there's not a lot of story potential that I see. What do you guys think? If you want to reserve judgment until you see what I've come up with for it, that's fine.

(For those who don't remember, the Invisible Country was one of the hazards faced by the heroes of "The Tin Woodman of Oz". Slightly more memorable may be the Hyp-po-gy-raf that they met there.)
Posted by F. Douglas Wall at 3:41 PM 1 comment:

Thursday is now the day

Just because it's working out better for me, Thursday is now the official blog day.

Not much news to report at this time. If all goes well, I should have a preview of Munchkin Country available by next Thursday. And since Munchkin Country is relatively unexplored, my playtesters should have an updated document for that, too. Meaning that my playtesters will have even more information that is not available to the general public. To get the latest set of playtest documents and any updates, send me an email at konradthebarbarian@yahoo.com . If you're playing the game, send me an email to let me know how you're doing.

And I'd also like to apologize for my last few posts being a bit ranty.
Posted by F. Douglas Wall at 6:02 PM No comments:

Another late post. I'm thinking that I should move my usual blog day to Thursday just because it is becoming more difficult to find the time on Wednesdays.

I just found out that a couple of Baum's books are still under copyright. Apparently, Dover Publications bought the rights to these books while they were still protected and they are now the copyright holders of "John Dough and the Cherub" and "Queen Zixi of Ix". It will take some time for me to figure out exactly what my ability to refer to those works will be.

The good news is that I have plenty of time. As I've mentioned before, the setting info in the rulebook will focus on Oz itself, with the other lands going to a supplement. So I have at least that long to sort things out and round up any money needed.

It can't be too difficult, since Hungry Tiger Press recently published a new edition of John Dough, since Dover let it fall out of print.

Second item: For those who have been paying attention, I am calling my publishing enterprise F. Douglas Wall Publishing. There are two reasons for this. For one thing, this saves me having to file Fictitious Name Statements and the expense of that.

Also, it helps remind people to get my name right. The fact that I use my middle name makes things awkward enough, but people just can't get over the first initial. My high school yearbook gives my name as Douglas F. Wall.

More recently, I entered a video contest at The Fump. When the winners were announced (finally!) at Con on the Cob, Tom Rockwell AKA Devo Spice of Sudden Death got my name wrong. He simply said "F. Douglas". An honest mistake, I'm sure, especially since my partner in crime (and many other things) attached the name K. Green to the project. It's just that it's one of many mistakes made by many different people that makes it so irritating.

I try and keep my personal life out of this blog, because this is intended to support my publishing enterprise. But it's also oddly relevant. Notice that the original author of the Oz stories is named L. Frank Baum. Although his first name was Lyman, everyone knew him as Frank. In an article promoting an educational event about Oz in the local library a couple of months ago, the creator of the Oz books was none other than "Frank L. Baum." I wonder how many times that has happened over the years and if I'm the only person out there irritated by this.

In other news, work is proceeding apace on the new setting material. If I can find the time and energy, I should be able to have an update for my playtesters today, but by next blog update at the latest. Then it's off to work on the next tantalizing preview of the land of Oz for my devoted readers.
Posted by F. Douglas Wall at 9:33 AM 6 comments:

First late blog posting in a while. Hope you're not too disappointed

For those who have been paying attention, I've been blogging for the last 6 months. When I first embarked upon this project, I thought I'd have something to show for all of this by now. While I don't have a product to sell, I do have a bit more wisdom than I did when I first started out. A few of the things I've learned so far are:

1) Things cost money. One of the biggest stumbling blocks I've come across is money. In as many areas as possible, I have attempted to get things done for cheap or free. Web-hosting on the site is free, this blog is free. The things that cost money are either happening later or slowly. The website is not pretty, but it costs money to hire a web designer. I would advertise more than I do, but again, it costs money. Art is getting paid for slowly. It doesn't help that I lost a job and had to go on unemployment for a while until I got another job and neither of them pay terribly well.

2) Other people are other people. No matter how much I've tried to build a community around this project, little has happened. To my knowledge, no one has played the game. For most of the time I've been working on this, I haven't had a gaming group of my own. I finally managed to get some people together a couple of weeks ago, but Adventures in Oz got voted down as our system of the moment. This may change; I'll keep you posted.

3) Thrive on deadlines. The weekly blog helps me set deadlines. If I don't have something meaningful to post by the time Wednesday rolls around, I had better come up with something.

If anyone is interested in being a playtester, feel free to give me an email at konradthebarbarian@yahoo.com . You will be emailed with the Adventures in Oz playtest kit, and will receive updates to the system by email, as they happen. It contains all of the rules and setting material as they exist up to this point. While all of this material is on the site at this moment, this will change. That's right, sign up to be a playtester and you'll get access to exclusive content before anyone else. Also, playtesters who provide useful c0mments will get their name in the book and a free copy of said book as soon as physical copies are available.
Posted by F. Douglas Wall at 8:33 PM 4 comments:

New updates to the site.

First of all, I've brought "The Magic Belt of Oz" up to the new revision. A number of changes to the system were inspired by the needs of this adventure, so it should play better than it did before.

Also, I've uploaded the first bit of revised and expanded setting material. I'm trying to lean more on my own words and less on Baum's.

For those of you have read "Glinda of Oz": Is it just me, or do our friends from the Emerald City wind up doing little to nothing to stop the war? The Adepts are rescued by Ervic, then go to discipline the Flatheads. While they do manage to raise the Skeezer city from the bottom of the lake, they seem to be on the sidelines of the story's main conflict.
Posted by F. Douglas Wall at 8:43 PM No comments: