Adventures in Oz: An Inclusive RPG

While Heartbreak & Heroines seems to be cancelled, it has given us all some food for thought about the idea of inclusion in RPGs. Or at very least drawn attention to the fact that we're more exclusive than we think we are.

Like it or not, the typical gamer is male. So most of the marketing dollars spent in the RPG industry are reaching out to those men, playing on their desire to be badass fantasy heroes and be surrounded by nubile women. Although some of those nubile women are now fighting alongside the heroes rather than waiting to be rescued and claimed as a quest reward.

As soon as I set about writing an Oz RPG, I knew that I could not in good conscience cater specifically to this market. Because Oz really is a setting for everyone.

My first step came with the writing. While it is commonplace to use the pronoun "he" as a gender-neutral pronoun, I decided to avoid gendered language as much as possible. This does mean that "they" comes up a good bit. There are those who say that using "they" as a gender-neutral pronoun is bad grammar, which might be why I get a lot of knocks for my grammar in reviews. I only used gendered pronouns when I was referring to a specific, gendered character. (Chick the Cherub is going to get interesting when I do Beyond the Deadly Desert)

The next step was the art. While I did not make a point of asking for non-sexed-up art, I was very glad that I did not receive any. Many of the female Oz characters are frequently described as beautiful, but this is the sexiest piece of art I received. Notice that she is sexy without being sexed up. No revealing clothing. No distorted anatomy designed to show off T&A.
Posted by F. Douglas Wall at 7:58 PM 4 comments:

The Women of Oz

My original idea for this week's blog was to look at the strong female characters of the Oz stories. Heroines and villainesses, rulers and sorcerers. But then I thought of the gamers in my audience (all 3 of you) and wanted to give them something a little more concrete than a book review. So then I thought about the issue of gender at the gaming table.

Tabletop RPGs, like many other geek activities, is predominantly a male activity. (In fact, the only geek activity I can think of that is predominantly female is cosplaying). I'm male, though I have gamed with women (notably my wife). My Monday night OSRIC campaign has one female player. Since her character has the highest Strength score in the party, we all call her "Boots", as she's the one with the best chance to kick down doors. My Thursday night IronClaw game has two female players, one of whom is playing a female Rhinoceros Pit Fighter.

But I know I'm not typical. There are horror stories floating around the net about female players being sexually harassed by the other players or even the Game Master. Like the group that played the world of Gor (JFGI) and had the one female character that spent most of her time getting traded around by the male characters.

The other night, I found this interesting little item: Heartbreaks and Heroines, a feminist RPG. I found it via this great big honking thread on RPG.Net, which is probably still growing as this gets posted. What is a "feminist RPG"? Apparently one that puts women in the primary roles and focuses on the emotional journey of becoming a hero and finding your place in the world.

But wait, if all feminists really want is equality and parity with men, why have a game that emphasizes women? The answer seems to be to create a deliberate imbalance in one segment (the players of one game) in order to create parity in the gamer population at large.

While the project is fully funded, I'm sure the designers would appreciate an extra buck or two to help propel the project even further.
Posted by F. Douglas Wall at 2:36 PM 3 comments:

Before I set about whining, I'd just like to mention an Oz author who did not make it onto my big list. Ron Baxley Jr. He wrote the book "The Talking City of Oz" which was originally published by March Laumer's Vanitas Press back in 1999. He recently teamed up with an Oz author who is on the list, James Wallace III, to write Of Cabbages, Kings and Even (Odd) Queens, an Oz/Wonderland crossover novel. Both of those works are in the process of receiving second editions later this year, so hold on to your wallets until these guys have a chance to wow you.

If you want Ron to be noted as your favorite Oz author, just choose "other" in the poll on the side and then add a comment to any blog post declaring your love for Ron. And do it soon, as the poll closes in just two weeks.

Now on with the whining,

Adventures in Oz: Fantasy Roleplaying Beyond the Yellow Brick Road has not made a huge splash in the gaming world. That's not surprising, as I don't have a large promotional budget, or a big budget at all, really. So when the Ennies rolled around for this year, I decided to go for it. It seemed like the process was deliberately designed to be accessible to the little guy, so I thought I had a chance. Especially with the good reviews that I've gotten over the past year.

But when the nominations rolled around, it quickly became clear that this playground had already been claimed by the big boys. No room for the little upstart with a small budget and a big dream.

While I was munching on sour grapes over in the corner, I stumbled upon this. Wundergeek mostly focuses on the pit of misogyny that is the video game industry, but she does take some time for us tabletop gamers every now and again. I feel slightly better now, knowing that AiO would likely pass her criteria for a successful female depiction on the cover of an RPG. (Note that I have not asked her to examine this at all, so she has not endorsed this in any way shape or form.) 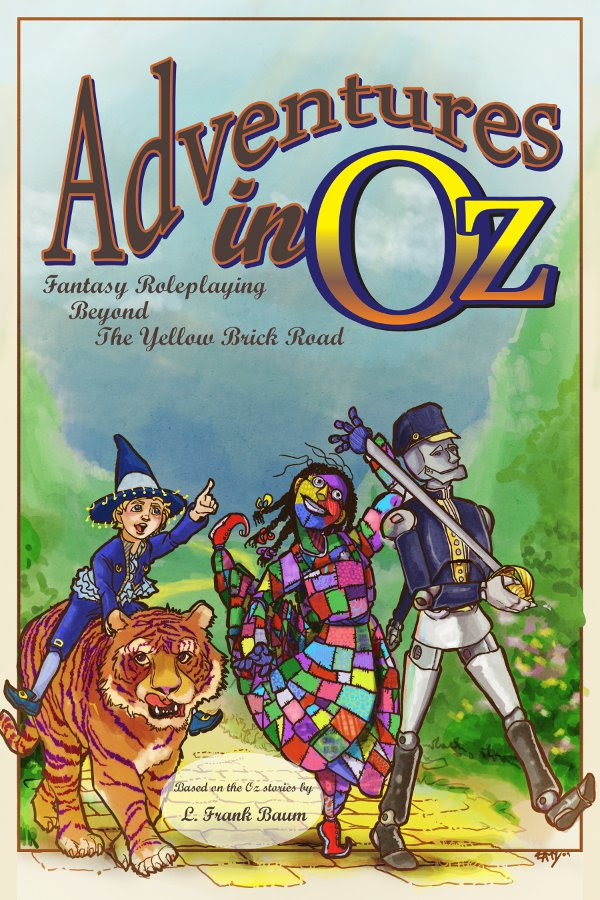 So I feel slightly better. There is some standard by which I am clearly better than those pesky Ennie nominees.
Posted by F. Douglas Wall at 11:18 AM 4 comments:

And the nominees are....

Oz Character of the Month: The Wizard

Also, tomorrow is the scheduled announcement for the Ennie Award nominations. There were quite a few entries, so it's still anyone's game. Watch this space, as well as the official Ennies site, tomorrow to see if I got the nomination.

There's a new poll up, as well. It's been up for a while, but I forgot to mention it last week. So who's your favorite Oz author, old or new? Inquiring minds want to know.