For those of you who haven't heard the term, there was a time in Hollywood that a handshake was considered to be the equivalent to a signed contract. This notion may have changed since last I heard, as I am out of touch with a lot of things.

While the "Hollywood handshake" may or may not be dead in Hollywood, it is alive and well on the internet. For a wide variety of purposes, simply clicking a little button or checkbox counts as a "signature" or agreement to a set of terms. Even sites like lulu.com or zazzle.com will let you sell products with little more than this.

The reason I'm talking about this is because I have discovered a rather interesting exception. I've mentioned that I am interested in selling AiO as a PDF file, as this is a profitable option in the RPG market. There are a number of sites that sell gaming PDFs, like RPGnow, DrivethruRPG, YourGamesNow, and Paizo.com. And every one of them requires a signature signed on honest-to-god paper using actual ink.

In other news, the game is still in progress. It is currently being laid out, incorporating the art that I've commissioned as well as discovering the places where it needs more art. Which means that I have to commission more art in order to fill these "art holes" and that is a process which takes time. I can't simply tell an artist "Give me 2 barbarian warriors, 3 eldritch abominations, and a orc with a battle-axe". As I mentioned in Jared's podcast, finding the right artists and art is a task in itself.

Although my goal was to release it this year (preferably August 21st), I am finding myself facing realities that it might have to wait until next year. I could probably put something out right now, but it would not be the game that I want to put out, and I don't think it would be the game that Oz fans and gamers deserve. So the progress bar is at about 95% and creeping ever closer to 100%.
Posted by F. Douglas Wall at 10:18 AM No comments:

I actually wanted to do this blog last week, but I felt that I was putting up too many gaming posts and losing my Oz "cred". I keep shooting for a balance, but that balance swings from one side to the other before it eventually (I hope) settles down.

I think one of the biggest obstacles to bringing more gamers into the hobby is, well, the gamers themselves.

Reason #1) The Geek Social Fallacies. Everyone wants friends that accept you for who you are. But there is such a thing as taking it too far. The unwashed nerd is a pervasive stereotype and a tough one to beat. The good news is that I have only met 1, maybe 2, in my 10 years as a gamer. All of the other gamers I've known have been fairly normal people.

Reason #2) Gamers think they need gamers. It's a fairly common complaint on RPG forums and internet boards: "I can't find any gamers!" People seem to think that only people who play RPGs are going to be interested in playing RPGs. I'll admit that I fall into this to at least some degree. My last two gaming groups have consisted of people that I knew from previous gaming experience.

But remember that every gamer started out gaming sometime. Whether that was red box D&D at the age of 10 or finding the gaming club at your local university, before that point, you were just an ordinary non-gamer. Someone had to introduce you to the idea, plant the seed in your brain and run your first game.

I'd like to propose that any gamers out there reading this invite one of their non-gamer friends to their next game. And if you're a gamer who can't find enough gamers for a group, try gathering some friends and see what happens. And for those Oz fans out there, next time you have a meetup, rather than busting out Trivial Pursuit Wizard of Oz edition, try Adventures in Oz. The beta files are still available on my website until the official game is released, so you don't have to wait forever.
Posted by F. Douglas Wall at 7:38 AM No comments:

The Wizard of Three

The story The Wonderful Wizard of Oz uses the number 3, but not in the traditional fairytale manner. Dorothy's adventures often break down into blocks of 3.

Upon starting on her journey, Dorothy makes 3 friends (Scarecrow, Tin Woodman, and Cowardly Lion). Before arriving in the Emerald City, the party faces 3 dangers (the river crossing, the Kalidahs and the Poppy Field). On their journey to the castle of the Wicked Witch of the West, the friends must face 3 waves of creatures sent by the Witch to destroy them. Once the Witch is defeated, Dorothy gains the Golden Cap, which allows her to command the Winged Monkeys (you guessed it!) 3 times. Not surprisingly, the ritual to summon the Winged Monkeys has 3 steps.

There is a little flexing of this pattern in the final leg of Dorothy's adventure. It looks very much like Dorothy and company have 4 encounters in this part of the story (the Fighting Trees, the Dark Forest, the China Country, and the Hammerheads). If I were to force it to fit the pattern, I would do so by not counting the Dark Forest. It was much more about the Cowardly Lion and giving him a place to rule, like Tin Woodman had the Winkie Country and Scarecrow had the Emerald City, than it was about the group having an adventure.

Both of these "Rules of 3" can be useful when preparing a story for an RPG. A fairy tale-style story can be easily created by setting up 3 simple scenes, each echoing a single theme or incident.

One of my players often makes the joke that the distance between any two places in my RPG worlds is "3 random encounters." (Even though I never use random encounters.) But it's not a bad idea. If you wanted to set up a list of random encounters for the characters to face, or just plan them into your story, it would make the land of Oz a bit more alive and interesting.
Posted by F. Douglas Wall at 10:06 AM 1 comment:

Email ThisBlogThis!Share to TwitterShare to FacebookShare to Pinterest
Labels: Oz

A Very Merry Un-Birthday To Who? To Me!

It may not be my birthday today, but it will be tomorrow. I will be 31 years old. This is the second birthday of mine to be commemorated on this blog and hopefully not the last.

And have I got a present for you! This lovely map of Oz was created by the talented cartographer Steff Worthington for inclusion in my game, Adventures in Oz. He is also working on a lovely color map which will be made available as a poster on my Zazzle store and I plan on releasing that version of the map under a Creative Commons Non-commercial license. Until then, this map is copyright (C) me and usable only with permission or as otherwise allowed by Fair Use laws. 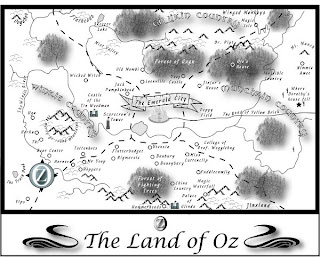