The idea of a "sandbox" RPG conjures a rather interesting image in the mind of the layman. The prospective player exists in an unformed expanse that is waiting to be formed by his actions. Their character sheet and the rules of the game are the bucket and shovel that the player uses to sculpt the setting into something truly awesome.

Which failed. After a session or two of the characters not knowing what to do with all that sand, the party broke their oath to stay away from Utensia.

It was my recent acquisition of the Smallville RPG that helped me most with coming up with a good metaphor for this sort of open-world gaming. Character creation in Smallville is equal parts defining your character's abilities and defining their relationships, including drawing a "relationship map" that can become very complex as the process continues.

Items on this relationship map not only have lines linking them to the player's characters, but a rating describing how strongly each of the characters is connected to that minor character or location. Which basically explains why Clark Kent is always rescuing Lana Lang rather than Random Victim #4; His connection to her is stronger, so he is stronger in scenes and activities that connect to her.

So we have a complex map and a strong motivation to stay within it's framework. Sounds like pinball to me.

Rather than talking about sandbox gaming, we should instead talk about pinball gaming. Narrators (and increasingly, players) create a setting full of pins and bumpers for the players to interact with and bounce off of during play.
Posted by F. Douglas Wall at 7:48 AM 1 comment:

Death, Fireballs, And The Lack Thereof

One of the things that we talked about in the podcast (I've you haven't heard it yet, go to it!) was that Adventures in Oz: Fantasy Roleplaying Beyond the Yellow Brick Road has a No Death Rule and a No Fireball Rule.

When I was designing AiO, one of my big questions was how to resolve the inconsistencies of the Oz stories. In The Wonderful Wizard of Oz, the Tin Woodman winds up doing a lot of killing with his ax. The Road to Oz mentions a suicide. Later stories, however take a decidedly different turn, declaring death impossible.

But without death, there tends to be little risk in combat. One thing that particularly irritated me about Faery's Tale was that losing a fight meant that your character had to sit out for a scene. Probably a stern consequence for the young children that the game was designed for, but feels a little too milquetoast to be effective for grownups.

Ultimately, I decided that the worst thing next to death was living with your defeat. Opponents may take advantage of your reduced Wits score to use an Impress maneuver and force a concession. Or, as I mentioned on the podcast, beating someone down to 0 Wits could mean that they collapse into a bawling heap that you then have to deal with.

Now imagine that you've just had an epic battle with a dragon and you have emerged victorious. Instead of a dead body and a hoard of gold, the party now faces the dragon crying prehistoric crocodile tears and sobbing about how none of the other dragons will take him seriously now. Consequences? Yes. Death? No. Adventure possibility? Totally!

The Deadly Weapon trait and the Deadly Strike maneuver it allows is another opportunity for adventure. Although they have Deadly in their names, they are very much not lethal, but it does serve to convey their impact. When the Tin Woodman swings his ax, it's best to watch out. Seeking out replacement limbs from a craftsman of some sort or maybe a secret sorcerer is bound to be an interesting adventure. And the limbs that you wind up with can be fun, too. I seem to recall an Oz character from the Ruth Plumly Thompson era with a "game leg", an artificial leg that housed a number of games within it.

The lack of direct combat magic (fireballs, lightning spells and other fun zappy stuff) came about for two reasons. First of all, it never happened in the stories. In fact, I think the only time magic was used in a conflict was when Dorothy used the Magic Belt on Ugu the Shoemaker. The other reason is that the combat system didn't really have room to shoehorn it in.
Posted by F. Douglas Wall at 9:56 AM 1 comment:

Here's a little podcast released by the wonderful folks at PulpGamer.com that lets me and a couple other gamers geek out about Oz.

If you're checking out the blog in response to that podcast, here are a few items of interest:

First of all, over on the right you'll find links to all of the places you can purchase Adventures in Oz: Fantasy Roleplaying Beyond the Yellow Brick Road. RPGNow and DrivethruRPG also offer AiO in print via their POD service.

This blog entry contains links to reviews of Adventures in Oz, and this one is a FAQ about the game that I compiled some time ago. If you come up with new questions for me to answer, feel free to ask by commenting on this post, that post, or via email at adventuresinoz@thegame.com

If you want some idea of the variety in the Oz stories, and the simple flexibility that the AiO system provides, check out the Oz characters and magic items that I've written up for the blog.

Finally, I do have an actual website over at www.adventuresinoz-rpg.com that has printable Oz maps and character sheets for your downloading and printing pleasure.
Posted by F. Douglas Wall at 1:58 PM No comments:

Email ThisBlogThis!Share to TwitterShare to FacebookShare to Pinterest
Labels: podcast

I hope you guys enjoyed my little April Fool's joke last week. Unfortunately, RPG success is nowhere near rockstar success. I do hate to disappoint Adam, but there are no hookers or blow to be had here. Chris Pramas and Green Ronin are real (and awesome), but I have no real relationship with them. So even RPG success is currently outside my grasp.

Wednesday night, I participated in a roundtable discussion with a couple of other Oz game designers put on by the wonderful people over at Pulp Gamer.com. It will be released as one of their Out of Character Podcasts in the next few weeks. Links will be coming as soon as it has been edited down into something listenable and posted at their site. 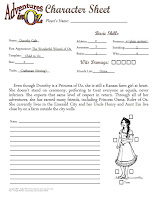 hat this is usually the week where I post an Oz character or spell, and have I got a treat for you. I've been talking about this "characters pack" thing for a couple of months now and it is finally taking shape. So here's a little preview. A deluxe character sheet with stats and details for Princess Dorothy Gale. The characters pack will contain 14 other classic Oz characters as well, suitable for use by players or Narrators to bring a little more Oz flavor to your games.
Posted by F. Douglas Wall at 11:58 AM No comments:

As you know, I don't like to announce things until they're final, because real life has a funny way of happening.

But now that the i's have been dotted and the t's have been crossed, I feel safe announcing this. Chris Pramas of Green Ronin has bought out the rights to Adventures in Oz: Fantasy Roleplaying Beyond the Yellow Brick Road and plans to provide support like never before.

His proposal came attached with synopses for a trilogy of adventure modules:

Descent into the Depths of the Earth, which would return to the land of the Mangaboos and explore the interior of Pyramid Mountain,

Vault of the Nomes, getting the PCs involved in Nome politics with the earth's supply of precious metals and gems hanging in the balance,

and Queen Zixi in the Pits, which brings the party to Ix where they must attempt to cheer up the Queen before her birthday celebration.

What's my role in this? Frankly, now that I've made my fortune in the RPG business, I am officially retiring and spending all of my money on hookers and blow (or something like that).