Not What I Wanted, But It'll Have To Do

Of course, once I am home from the con, it's time for me to tell you all about the cool stuff I bought. Unfortunately, I didn't buy very much cool stuff this year. The main reason for this was a lack of core product for sale.

For example: One item that was really big this year was the Dracula Dossier, a supplement for Night's Black Agents, a game of spies versus vampires. But there were no copies of NBA to be had. After listening to Ken and Robin plug this thing all to heck on their podcast, I was looking forward to closing that gap in my collection and adding on the new hotness in one fell swoop. But it was not to be.

Supplements tend to be a tough sell with me. I either have to be running the game or sufficiently impressed with the game just by reading it to throw more money that direction. I also enjoy checking out new ideas in gaming rather than dwelling too much on the same thing.

Buying supplements also makes me feel like I'm doing a disservice to you, my dear reader. I know not all of you are tabletop gamers. Recommending a supplement to people who haven't bought the core system is like recommending DLC for a video game that other people might not have. But it seems to be what we have to work with this year. 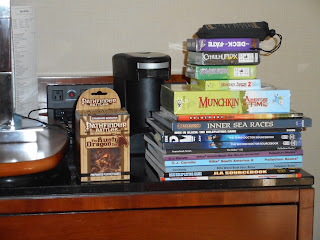 Rifts: 3 Rifts books (and one Rifter magazine) made it into the collection this year. South America 1 and 2 written by  C.J. Carella, the one Rifts writer I've found that doesn't suck. Other Rifts fans may disagree with me, but I think his overall body of work outside of Rifts is pretty impressive and his work within the Rifts universe maintains that standard.

Men in Black: One of only 2 core rulebooks I picked up this year. It was released to tie in with the first film, so it's a pretty slim volume. It was published by West End Games using a version of their D6 System. Needless to say, I bought this one used from the Buyers Bazaar.

Doctor Who: Having picked up the Fourth Doctor sourcebook last year, I thought I would pick up some more Doctor Who supplements. So this year I got the sourcebooks for the Second and Third Doctors. The Third Doctor is pretty much my favorite Doctor, though mostly for his supporting cast rather than the specific virtues of Jon Pertwee. His era featured my favorite Master as well as my favorite companion, Sergeant Benton.

These books are something of an exception to my rule of not recommending supplements. If you are a fan of classic Doctor Who, you will find something to like in these books.

DC Universe: Another vintage buy from West End Games. I've owned the core book for some time, but this year adds the Metropolis and JLA Sourcebooks to my collection. Most of the content of these books are character write-ups with game statistics. There are interesting bits of history and setting details buried in there as well.

Licensed superhero RPGs seem to rely fairly heavily on the existing characters of the franchise. Which really sets them apart from nearly every other RPG out there. There might be a blog post in there somewhere, but for now, it's just an interesting observation.

Inner Sea Races: The wife's pick this year. I don't mean to imply that she only buys one book a year. She makes a number of game buying decisions over the course of the year. DunDraCon is just much more of a vacation and chance to play for her. Inner Sea Races is primarily a "fluff" supplement detailing racial and ethnic groups in the Inner Sea region of Golarion, the default setting for the Pathfinder RPG.

Golden Sky Stories: This is a game from Japan, translated into English and the second and last core rulebook I bought this year. It calls itself "Heartwarming Roleplaying." The characters you will create are henge, animals with magical powers, including the ability to transform into a human. The system doesn't use dice to resolve tasks, but instead gives you points to spend on your actions. These are Feelings (for mundane actions) and Wonder (to use a henge's magical abilities).

You are rewarded for helping humans with Threads and Connections to help you on later adventures. Every now and again, I'm tempted to add a more complex relationship system into AiO. But I think that exploration and discovery are major themes of the stories, so a mechanical bribe to stay in one place doesn't seem right. But for this game, it seems to work fine.

The animated films My Neighbor Totoro and Pom Poko are good inspirational material if you are going to run or play Golden Sky Stories.

Munchkin Adventure Time: Without as many RPGs to buy, I picked up a few card games. This version of Munchkin features not only monsters from the land of Ooo, but also gives you the opportunity to play as your favorite Adventure Time heroes (or their cross gender fan fiction counterparts).

The Dungeon Crawl expansion offers another new card type: Dungeon cards. These offer neat bonuses and penalties based on locations.

Fluxx: I had previously purchased the Oz version, so I decided to pick up the Zombie and Cthulhu versions of the game. The main twist here is that both of these games feature "Ungoals," which work just like Goal cards, but if their conditions are met, the bad guys win and everybody loses. However, there are also cards you can play in order to "switch sides," making a victory for the bad guys a victory for you, too.

Deck of Fate: An accessory for Fate Core. If you can't get your hands on those funky FUDGE  dice, this is an interesting alternative. The main deck can be used to simulate a roll of the dice and each card also contains a small bit of description related to how high or low you "rolled." There are 2 additional "arcana," mini-sets which are supposed to be inspirational, but I don't see much use for them at this point. Maybe when I get around to running Fate.

And yes, that is another Noteboard on the top of the stack. 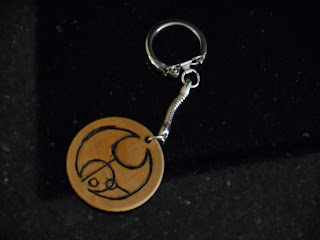 Just because my wife doesn't buy a lot of games at DDC doesn't mean she doesn't spend money. There was a nerd crafts booth, where my wife got me this: a wooden medallion with my name written in Gallifreyan burned into it. 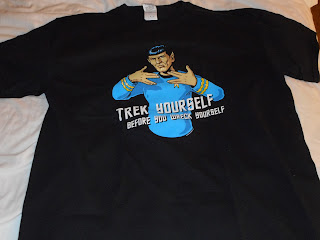 And a new addition to my collection of Star Trek nerd shirts.
Posted by F. Douglas Wall at 5:44 PM No comments: