Bill Walton has been a gaming advocate for some time. He's been maintaining the advocacy website The Escapist for over 15 years (and demonstrated that D&D spells don't work in real life), spearheaded the Read an RPG in Public Week (held twice a year wherever you happen to be) and been an all around stand up guy.

Well, a few days ago, he lost his home in a tragic fire. He and his family are safe and well. They've put together a page on their website to let everyone know how they're doing and what can be done to help them get back on their feet.
Posted by F. Douglas Wall at 3:57 PM No comments:

Well, I got a reply from Zazzle. It was actually sent out on Thursday, but it got caught in my spam filter.

Thank you for allowing us to be of service to you.

Thank you for being a Seller at Zazzle.com!

We would love to offer every design that our users submit, however we must abide by all applicable laws and standards as well as our own content guidelines and copyright policies.

Thank you for cooperation in this matter.  We hope that we can work together in providing our customers with one-of-a kind merchandise that can only be found Zazzle!


I sat on that for a while. I wasn't sure if I would get anywhere if I pressed the matter further. And in either case, it was WB's fault for filing a spurious complaint. Just as my plan was brewing to petition Warner Brothers to stop harassing  Oz fans, I saw that the guys who are working on a new film adaptation of The Wonderful Wizard of Oz had some luck getting their harassment cleared up. So I composed this little beauty:


As I'm sure several of my Oz brethren have explained at length, WB's copyright claims are too broad to be truly defensible. Most of the others affected by the takedown requests have been able to claim that the images on their products adhered fairly strictly to the public domain sources. My case is a little bit different. As you acknowledged in your previous email, the image that spawned my complaint is original work. So my argument is that the image is not only based on public domain sources, but also sufficiently original that WB has no claim on it.

The original image is still in my collection on Zazzle, but here's a copy for handy reference. 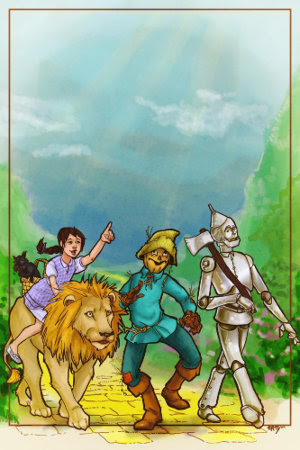 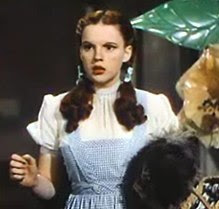 The main things that my Dorothy shares with the Dorothy that WB has copyrighted are the brown hair and the blue and white checkered dress. Both of these traits were first drawn by W.W. Denslow in 1900, putting them firmly within the public domain.

The main difference between the two characters in their shoes. My image gives her silver shoes, as she wore in public domain sources, while WB's Dorothy rather famously wears Ruby Slippers. My Dorothy is also clearly pre-pubescent, while Judy Garland can't fully hide that she was a teenager when she made that movie. Also, Judy wore her hair in pigtails, while mine has a single loose ponytail behind her. 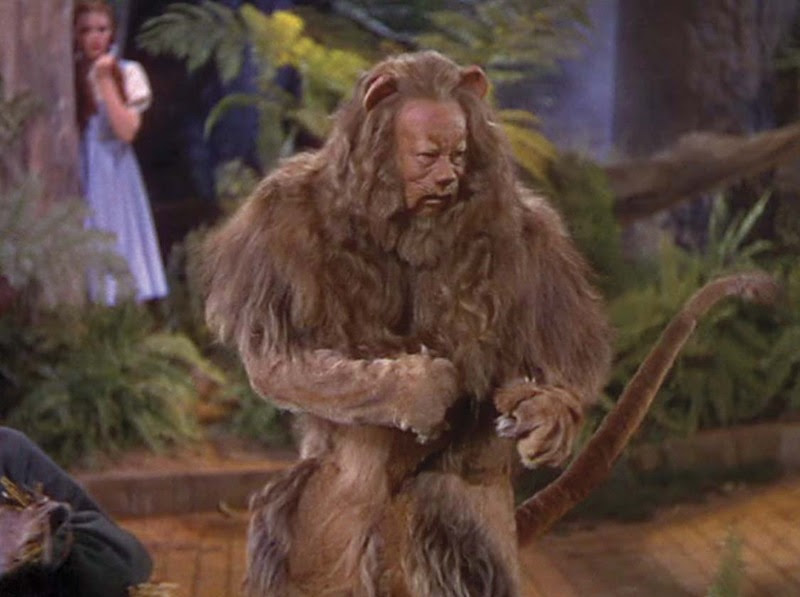 My Cowardly Lion is notably non-anthropomorphic (meaning: he doesn't look like a guy in a lion suit) as in public domain sources. Although the public domain illustrations give him an oversized head and expressive face, mine looks very close to an actual lion. If there's a copyright violation here, it should come from National Geographic.

The Scarecrow has a painted face, lacking the level of detail and texture of the main human character in the image (Dorothy), while WB's Scarecrow is a man in very well done makeup. The fact that his hat is yellow is a minor detail, but small differences accumulate. 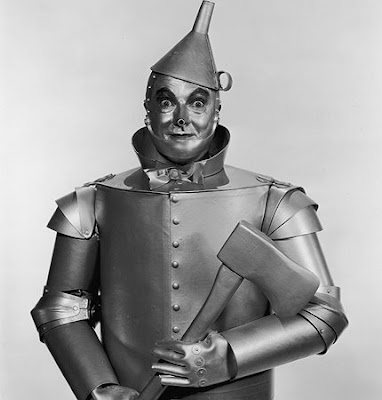 The Tin Woodman's head retains the skull-like aspect of W.W. Denslow's original depiction. The funnel hat was also originated by Denslow. His proportions are not upscaled to allow a human actor to occupy the tin suit (as in WB's copyrighted work), but are roughly human. His tin torso is even textured with the collar and buttons of a workshirt and he seems to have a belt around his waist. Public domain illustrations of the Tin Woodman feature him with clothing details worked into his body (typically a bow tie and lapels), while WB's copyrighted Tin Woodman has no clothing details.

There you have it. Clearly inspired by public domain sources, clearly original, and clearly free of WB copyright.

You Can't Be An Oz Creator Without Knowing Something About Copyright

I'm sure a lot of you have opinions about copyrights. I do too. But in order to get my dream together, I had to put some effort into understanding the way they work right now.

In general, copyrights determine who has the right to profit from a work. Typically, this is the author/artist/creator, but "work-for-hire" and similar arrangements can result in the copyright being owned by someone else. (All the images used on my Zazzle products were created under just such an arrangement).

And profit is a broad term in this case. This can be the profit derived from getting the book printed and sold, either by a publisher or (increasingly these days) yourself. A creator also has the right to profit from derivative works (sequels, adaptations, etc) based on their creation.

There are ways that someone who isn't the copyright holder can profit from a copyrighted product, called "fair use" but they are fairly limited. It is fair use to provide portions of the copyrighted work in reviews, as long as you don't give too much away. A parody or satire of a work can functionally replicate it in its entirety, as long as it's for comedy. Transformative works (those that draw from several sources in order to create a new whole, such as a collage or "found art", as well as those mashups on YouTube where Buffy the Vampire Slayer and/or Blade fight Edward Cullen) may also draw freely from copyrighted works.

("Fan works", such as fan fiction, are something of a grey area. Technically, they are derivative works, but both fans and creators are studiously avoiding putting that to the test. Fans are carefully not profiting from their works, while creators have internalized what the RIAA has taught everyone by now: It's bad PR to sue your fans. I know of at least one effort to get fan work recognized as "fair use" under law, but I haven't seen any direct results of that.)

Once the copyright has expired, however, all bets are off. Anyone who wants to may copy the work to their hearts content and sell to anyone who will buy. Adaptations and sequels no longer need approval or payment to the creator before they can be produced.

The tricky part for an Oz fan is that some works have fallen into the public domain, while some remain copyrighted. Most notably, the original novel, The Wonderful Wizard of Oz, is in the public domain, while the film adaptation, MGM's The Wizard of Oz, is copyright protected. So any derivative work needs to stay very close to the novel rather than the movie to pass copyright muster.

Most notably, Dorothy's shoes in her first story are Silver, not Ruby. And most depictions try to skew Dorothy to be rather young, rather than resembling the teenaged Judy Garland.

The infuriating thing about this whole Zazzle mess is that I did all that research to make sure my depictions and presentation were legal, only to be shot down by someone who likely didn't.
Posted by F. Douglas Wall at 11:03 AM 1 comment:

An Open Letter to Zazzle.com

(A little background: One of the many ways I've been attempting to fund my publishing dreams has been by offering shirts, posters and other gewgaws with artwork I have commissioned for this project over at Zazzle.com. There's a clever little animated ad-thing over on the right sidebar. Earlier today, I heard from some other Oz creators that some of their merchandise had been removed from their Zazzle store. I checked up on my own products and sure enough, some of my products had been removed as well. Specifically, those products that featured the main cast of The Wonderful Wizard of Oz. I have sent this message in reply to every individual product takedown notice they sent me.

Please note that this news is still very new. I have only sent this out within the last few minutes. I will give them a chance to reply before deciding whether or not to continue using Zazzle. I'll keep you posted.)

This is in reply to your removal of my products from your store.

While I applaud your efforts to protect copyrights, perhaps you should exercise some due diligence when deciding what is or is not a violation.

The image I used on my products was based on public domain sources, not copyrighted ones. It was commissioned by me and I possess the rights to use it as I did.

You are within your rights to refuse to offer my products on your site. Please acknowledge that I was within my rights to offer them in the first place.
Posted by F. Douglas Wall at 7:10 PM 1 comment:

Okay, so she's not an Oz character and this isn't April Fool's Day. The idea here is to present a "hack" for Adventures in Oz; tweaking the system to support a different setting or genre that still uses the same basic themes. Given the way AiO incorporates friendship into the mechanics, it seems a perfect fit for My Little Pony, another universe where Friendship is Magic.

Notes: Although the Large Animal template seems the obvious choice for a pony character, there were a couple of strikes against it. First of all, the Brains skill was too low to represent a character as smart as Twilight, and while Size 4 might be fine for a fully grown horse, Size 3 is probably more accurate for a pony character. Twilight has also removed the Magical Toolkit trait, since all she needs to work magic is her unicorn horn, but replaced it with No Arms, since she's a pony.

This ability allows a unicorn character to lift and move objects as if they had Athletics 2 without having to roll to cast a spell.

There are a number of ways that I could have modeled the way Twilight Sparkle and other unicorns in Equestria are able to use their magic in the place of hands. I could have given her a Brains specialty for Apportation magic, but I wanted to use her specialty on something that would give her more flavor as a character. The point cost also neatly balances out the cost of the No Arms trait.

If someone were feeling more ambitious about it, they could create AiO templates for Earth Ponies (the Mighty Blow trait is perfect for Applejack), Pegasi, and Unicorns.
Posted by F. Douglas Wall at 6:11 PM 2 comments: