Countering the Scry and Fry

While a goodly portion of my gaming life has not necessarily involved dungeons or dragons, I still try to keep up with things in that corner of the hobby. That's where I found this.

For those who don't like following links, the article describes a tactic known as "Scry and fry," in which the players use divination magic to locate the dungeon's "boss" and then cast another spell to teleport the party directly to the "boss battle" without going through the rest of the dungeon.

My initial response was to defend the tactic because 1) it is a valid use of those spells and 2) as I said in my comment on that page, a lot of the negative reaction I saw was DM's trying to require that the players go through their dungeon before getting to the boss battle and it really felt like a parent encouraging their children to eat their lima beans before they get dessert. Though on further reflection, I do understand the idea of players using it as a "cheat code" rather than simply a "fast forward".

While the owner of that blog has suggested that creating dungeons that aren't "lima beans" has gone on his list of future articles, I thought I'd share some thoughts on the subject as well.

First of all, the "scry and fry" tactic makes a number of assumptions that are fairly easy to upset. I think a case could be made that if "scry and fry" actually defeats your dungeon, you are a very lazy dungeon creator.

1) There is a "boss": While antagonism and conflict are important to any story, making your antagonist a single, powerful individual is just one possibility. It could be a group, or even an entire organization. The party could find itself in conflict with the forces of nature. They could fight a prophecy, trying to prevent an event from happening whether or not anybody involved dies.

2) The boss' identity and/or location are known or knowable: Okay, so let's assume that we've decided to make a boss for this story. If we want this boss to be less vulnerable to scrying or other methods of detection, he's got to be a mystery. Maybe the story is a murder mystery and the party can't act against the villain until they know he did it. Maybe the villain has a secret identity like a superhero and the party's magic can't track him when he's being normal. Or maybe he knows enough about magic to have some degree of protection against divinations (this was the primary solution I saw among the DM's who commented on this on Facebook).

In the case of a mystery story, I have little problem with using scry and fry or any other tactic to confront the villain. Since discovering the identity of the villain is the objective of the adventure, the confrontation scene is more resolution than climax in my mind.

3) The destruction of the boss will solve the problem or threat posed by the boss: There are certainly times where this is the case. But not always. Because most of the ways that villains gain power involve building an organization. An evil cult, a thieves guild, what have you. Ultimately, the boss is the capstone of the pyramid, not its base. So if all you do is kill the boss, you have not defeated the organization at all. The infighting among the organization's leadership to determine who sits directly in front of the firehose of money, magical power or whatever that the initial boss created can do damage to the organization as a whole, but everyone involved has a vested interest in making sure that the firehose keeps flowing at firehose pressures as long as possible and only once that fails to happen will the organization fully collapse.

3a) It is actually possible to destroy the boss through main force: This one is just a subheading because it's more of an edge consideration, and can be system-dependent. It could be that the boss is a supernatural creature who can only be defeated by using the Artifact of XYZ or by those who have gone through the Trials of AEIOU, which are somewhere in the dungeon but will be missed by those who teleport past them. Or maybe the boss just has a few more levels than the party and will overpower them since they didn't go through the dungeon and rack up the amount of XP that the DM expected them to.

Advice to DMs: Even after you start tweaking your storylines to counter scry and fry or any other Stupid Player Trick, your players may still try them. Do not go out of your way to thwart your players or kill their characters. Just confront them with the logical repercussions of their actions. Be warned that this can include unintended character deaths.
Posted by F. Douglas Wall at 3:16 PM No comments:

Here’s a wacky game to play. If you could pick any person from all of history to run an RPG for you, who would it be? And what game would you play?
It’s totally okay to fanboy on this. You can have Gary Gygax or Ed Greenwood run your D&D game. You can have Stan Lee run your superhero game (Would it be one of the Marvel licensed RPGs or maybe something like Villains and Vigilantes or Champions?). You can have Stephen Moffat run your Doctor Who game.

But don’t be afraid to get creative. While it may be tempting to want H.P. Lovecraft to run Call of Chthulhu, it might be interesting to think about what he could do to a Deadlands game. Why not have an epic Exalted campaign run by the epic master himself, Ancient Greek poet Homer? How about a Paranoia campaign with Ellen “GLaDOS” McLain as the Computer?
Posted by F. Douglas Wall at 6:05 PM No comments: 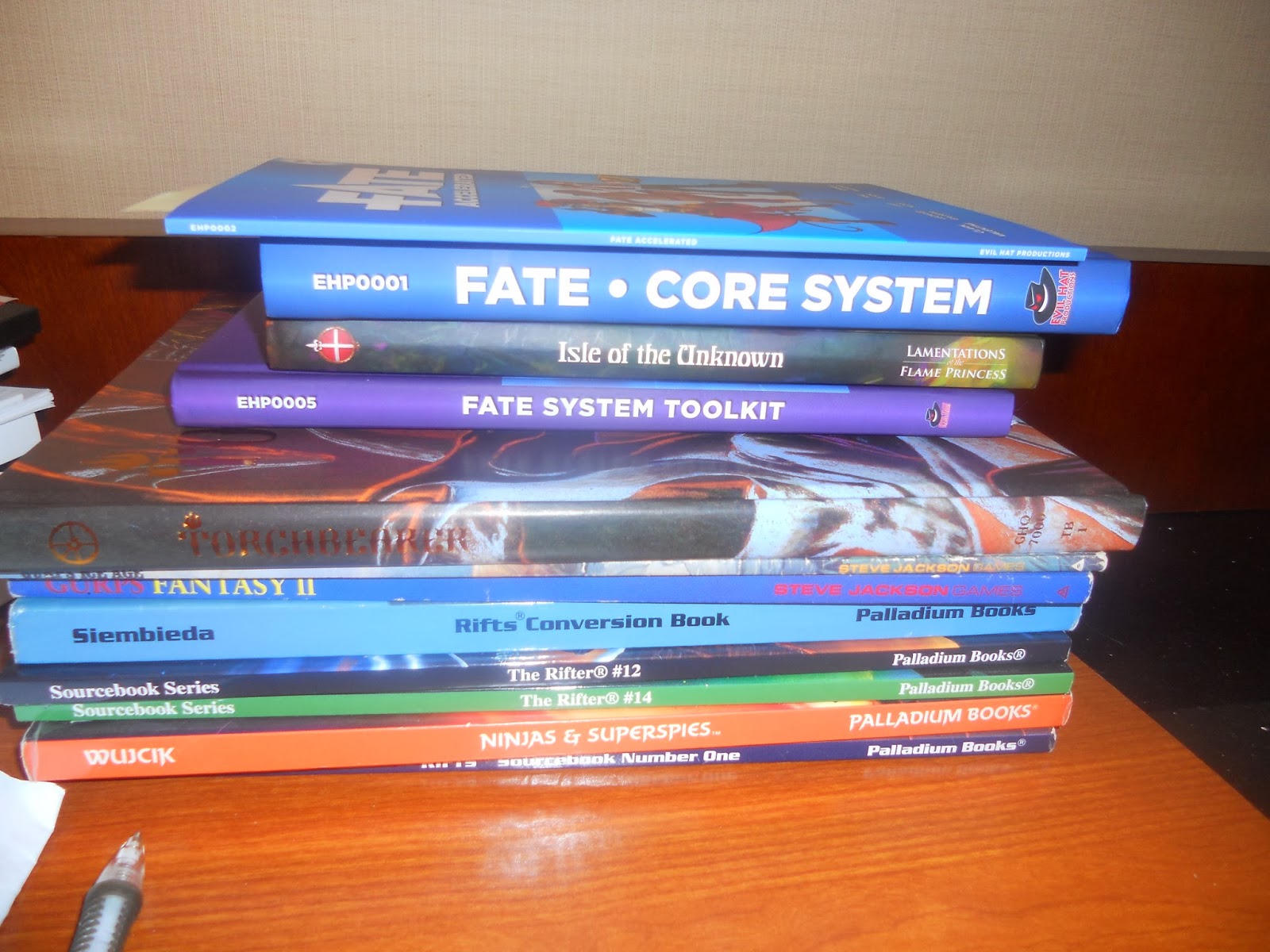 Fate Core: Despite all the hullaballoo surrounding the Kickstarter for this project, this was my first real opportunity to pick up this material. (I know the PDFs are PWYW, but I'm a lover of physical products whenever possible.) Fate Core is a clear step above previous Fate games I own; It's refined and flexible and robust. I haven't been able to give the System Toolkit a full grok, but it looks pretty powerful on the surface.

And that slim little volume on the top of the stack is Fate Accelerated Edition, which should not be judged on the basis of its size. It is not a stripped down version of Fate, a playable teaser to get you to buy the big book. It is a neat little game in its own right that can support campaigns as easily as one-shots.

Isle of the Unknown: This one was my wife's pick. Intended for the Lamentations of the Flame Princess retro-clone, it's pitched as a setting, but doesn't have a lot of things that would make it a setting. There are those who regard this as a feature, but I don't see it. It's pretty much just a big list of weird things. It might have been more effectively packaged as "exotic & weird random encounter table/s".

Torchbearer: Another fantasy game from the Burning Wheel gang, this one feels like a mid-point between the crunch-heavy, Tolkein-flavor-filled Burning Wheel and the really very light and approachable Mouse Guard RPG. It incorporates classes and levels very loosely, but neither really seeps into gameplay.

GURPS Fantasy II: One of Robin Law's first published works. This has been on my list of GURPS books that I really want, but didn't have for a very long time. It doesn't have many of the traditional fantasy touchstones that the main GURPS Fantasy setting (Yrth) has. It doesn't really have any of them, actually.

In the Mad Lands, magic is chaotic and distrusted. The worship of gods is suspect, because the only gods in the setting are more or less Chthonic Elder Gods (who just happen to be inspired by Winnie the Pooh and his friends). And the monsters are not random magical mutations of known animals, but people who have fallen to terrible fates. The primary focus of a Madlands campaign is survival in a world that is out to kill you.

Rifts: Picked up a couple of Rifters this year. I find them rather interesting because of how much material is contributed by fans. The Rifts Sourcebook and Conversion Books were from early in the line, so they give me a good view of what early Rifts was like, before things got totally gonzo.

Ninjas & Superspies: It's a mess, but it's a clearly an enthusiastic mess. Mystic martial arts, spy gadgets & vehicles all in one crazy book.

Mutant City Blues: Now for what Robin Laws has been up to lately. One of the hottest things in recent years is the GUMSHOE System, which is intended for use in mystery/investigation RPGs. The primary conceit of the system is that information gathering does not require dice rolls while still letting other things get dicey. While the second edition of the first GUMSHOE game, The Esoterrorists, was on a couple of shelves, the one that grabbed my interested was Mutant City Blues. The game is intended to emulate cop drama shoes in a world where super powers exist.

The key to making this premise workable is the Quade Diagram, which lays out all of the superpowers available in the setting in relation to each other. So if you've got a crime committed by the use of one power, you don't need to know zoology to know what animal powers your suspect has or high end physics to figure out the limits of someone with energy blasts or whatever.

Even the cops get superpowers. The whole "costumed vigilante" thing got discredited fairly quickly early in the super era of the setting, with several notable incidents involving un-expert civilians being allowed into crime scenes and hot situations and flubbing them totally and tragically. So super heroes have been relegated back to the comics, though some comics companies will license the likeness and abilities of "real" superheroes, who mostly do PSAs and mall openings. If you have powers and want to fight crime, you become a cop.
Posted by F. Douglas Wall at 3:27 PM No comments: