Fuddlecumjig is one of the more interesting bits of the land of Oz. A small town in the Quadling Country, Dorothy visits during the story The Emerald City of Oz. The people who live there are called Fuddles and have a rather special talent: When startled or surprised, they break down into puzzle pieces and scatter themselves.

The Fuddles also make an appearance in the adventure The Jaded City of Oz in the back of Adventures in Oz: Fantasy Roleplaying Beyond the Yellow Brick Road. In the adventure, the characters meet a mismatched Fuddle called Horbull. He got some of his pieces mixed up with another Fuddle and wound up getting the short end of the stick in the exchange.

This is one of my favorite sections of the Jaded City adventure. Mostly because I have some props. It's always cool when you can put a piece of the game world in your players' hands. As an added bonus, these puzzles give players something to play with. 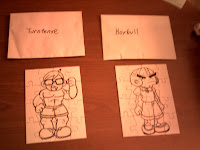 Email ThisBlogThis!Share to TwitterShare to FacebookShare to Pinterest
Labels: A to Z