While gaming conventions have been thin on the ground the last few years, my wife has been dragging me to Wasteland Weekend for the last 3 events (I'd say 3 years, but there was a 2020 in the middle there, so the 3 events happened over 4 years).

It's pretty cool. You basically spend 5 days hanging out pretending to be extras in the background of a Mad Max movie. If you want to get deep into the LARP angle, there are tribes and factions and missions that you can do. I keep meaning to get into that stuff, but I never quite manage. The tribes and factions also manage a lot of the entertainment. There is a main stage with live bands most nights, but there are also smaller events in other spaces. One night, I did karaoke in the Wreck Room. Another day, I visited the Slammer for a cabaret/burlesque show themed around villains.

The thing that sucks is that my wife and I don't drive, so we have to do a lot of wrangling in order to attend because 1) The event is held in the middle of the desert, and therefore 2) The only lodging available is what you bring in. Think about the amount of stuff you would need to go camping for 5 days, then modify that for desert conditions and further modify for having to carry all of this yourself for some portion of the journey.

We finally managed to make it home last night after train service interruptions made everything take much longer than it should have and cost a bit more, too.

So as fun as it is, I'm also thinking about how the annoyance and effort and expense create a counter-balance to that fun. If things tip too far to the annoyance side, it might be something we don't do again (much to the chagrin of my wife). 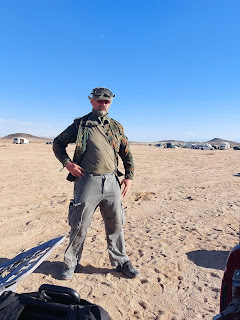 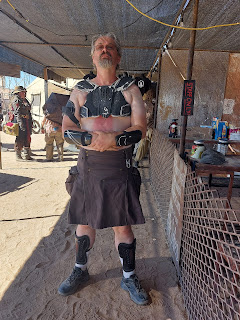 Here are a couple of pictures of me in my Wasteland gear. The first photo is pretty much my original costume. You have to have a costume to contribute to the illusion for everyone else. unlike a Renaissance faire where there's a clear divide between the participants and the tourists, Wasteland Weekend wants everyone invested in selling the post-apocalyptic vibe. I think a lot of people do a basic "military surplus" look early on to meet the basic requirement and upgrade as time passes. The second look is built around that chest piece. There's a funny story about how I got it that I may tell some time, but I count myself very lucky to have it and built a sort of second costume around it.

I do have other photos, but that would take some sorting and more brainpower than I really have right now.